Movie Review: Her as a Postmodern Work Her (2013) by Spike Jonze narrates the story of a man named Theodore Twombly who works for a corporation which helps individuals in writing intimate letters for their beloved ones. Theodore, the protagonist of the movie, is one of the writers. The story elucidates Theodore’s mutual affection for Samantha who is an artificially intelligent operating system. Her can be considered as a postmodern film due to the explicit presence of postmodern attributes like absence of grand narrative, deconstruction, undecidability, simulation, pastiche and so on.

Her deconstructs the idea of romantic relationship as the protagonist engages himself emotionally with an operating software which greatly suggest a living woman. Conventionally romantic relationship happens between physical entities, yet this dynamic 2013 movie heavily abuses it by introducing an extraordinary kind of romantic relationship where a human falls in love with a non-physical object. Theodore learns about the operating system from an advertisement and soon installs it on his home computer and phone. After a while, he and the software Samantha starts exchanging pleasantries and plays the role of strangers fated to become lovers. Her not only deconstructs the local idea of romantic relationship but also question human emotion. Theodor’s extreme isolation composed due to both his separation from his wife Catherine and everyone’s assignation to their machines rather than other people around them.

In effect Theodore’s emotion diverted towards Samantha, software that gave company to Theodore from dawn to dusk unconditionally. Her successfully asserts an unconventional concept of human-machine interaction that human being can be emotionally involved to machine as Theodor truly enjoys his time with Samantha despite being the fact that Samantha is a software. Theodore’s character writing letters on behalf of other people which are really heart-warming also take the emotion of love to a hyper real space as they are composed primarily by machines which have no emotion.

Alike Life of Pi by Yann Martel, Her comprises undecidability, the impossibility of deciding between two or more competing interpretations. In Life of Pi the reader is perplexed to decide which one is the actual story; the protagonist of the text Piscine Molitor Patel or Pi Patel survived 227 days in a lifeboat with animals or without animals? Similarly Her puzzles the viewers with Theodor’s emotional attachment to Samantha; is this because he wants to get a companion without responsibilities or ultimately wanted to have a relationship with his colleague and friend Amy by uplifting her sympathy for Theodor as he being a loner after Samantha left. Nevertheless, the film celebrates the multiplicity utterly which helps it to become a postmodern film.

There is no grand narrative in Her instead it is open to interpret individually. The romantic film can be interpreted from different levels as the movie is encompassed with micro narratives. No overarching framework is provided in this drama film rather local or small explanation is made. Her follows Theodore to comprehend his feelings but do not provide grand narrative or interpretation from any particular framework. For instance, when Theodore were asked whether he is social or antisocial and about his relationship with his mother by the operating system, he could not answer but viewers interpret the answers locally as there is no grand narrative clarifying the answers definitely.

The film also questions the grand narrative of romantic love and relationships as the protagonist falls in love with artificial intelligent software namely Samantha. In the movie, Samantha while talking to Theodore explains her happiness for experiencing different new emotions. She also adds that she is surprised at her own capacity to explore such emotions. However, then she says that it also saddens her when she questions whether these emotions are even real or just a consequence of some data fed in her system. Her successfully blurs the lines between humans and machines. It goes into the space where humans find peace and compatibility with machines designed apparently for them. The operating system goes on to outgrow humans with its power to comprehend emotions and grow in love.

Simulation, termed by Jean Baudrillard is a postmodern feature that can be pointed out in Her while the relationship between Theodore and Samantha undergoes through a crisis. Samantha yearns for a physical dimension to their relationship and suggests that she has found a surrogate woman on the web who is willing to have physical relationship with Theodore on her behalf with miniature cameras and microphones on her body so Samantha can experience their love to the fullest. Samantha herself is no physical entity which means she is not real yet she involves someone on behalf of her to get the experience of physical attachment which ultimately leads to simulation, a copy of the copy where surprisingly no reality involved at all. This scene dissolves romance, disorientation and absurdity.

Her radically combines science fiction and drama film which is an example of pastiche. Theodore uses artificial intelligent software which is indeed futuristic equipment but goes through psychological experience with the software which can be tagged as drama of life. This serious love film might not attract its viewers like other films as the love happened between human and software and thus the movie mocks the seriousness of the movie. This futuristic film constructed primarily with romantic aspects of life makes it a postmodern film.

In conclusion,Her is a remarkable film which shows the complications of human relationships and define relationship from an innovative perspective. As Kofi Outlaw of Screen Rent rightly pointed out that this movie is further proof that the outlandish imagination of Spike Jonze may be one of the most accurate and insightful lenses for observing the great human saga. Finally, Her successfully embodies traits that made this film a mind boggling postmodern film. 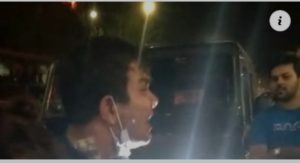